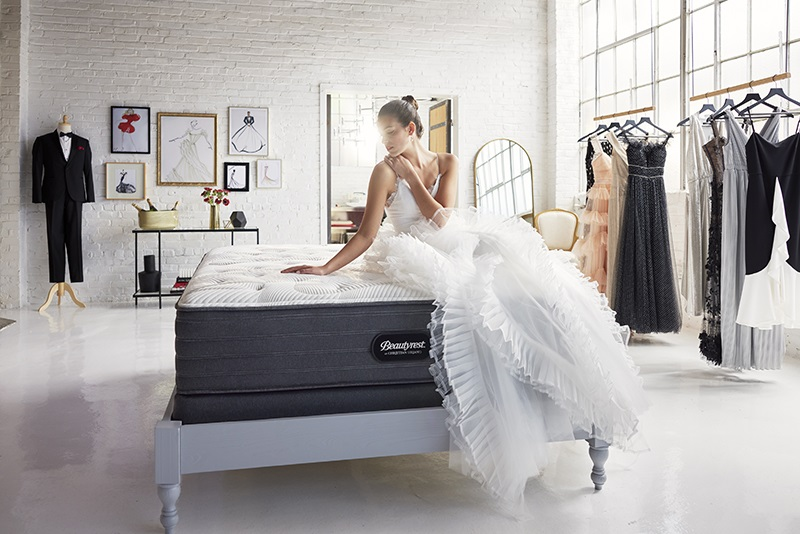 ATLANTA (June 1, 2021) – Beautyrest, a leader in premium sleep technology, today announced its first-ever custom collaboration in partnership with acclaimed designer Christian Siriano just in time for the summer wedding season. Dreamed up by Siriano himself, the Beautyrest® by Christian Siriano mattress offers luxurious sleep and the elevated life that comes with it. Inspired by Siriano’s bridal collections, the mattress was designed with couples in mind, for those who don’t want to compromise elegance for an undisturbed, luxurious night’s sleep.

“I’m a firm believer that a good night’s sleep is critical to looking and feeling your best. My creative process wouldn’t be possible without it,” said Siriano. “I’m excited to work with Beautyrest to bring my own style to their first-class sleep technology and help others feel invigorated, inspired and ready to take on the day.”

The Beautyrest by Christian Siriano mattress, with an elegant and unique top panel designed by Siriano and thematically inspired by a ‘black-tie affair’, is the must-have wedding registry item this summer. Perfect for couples, the bed utilizes Beautyrest’s innovative T3 pocketed coil technology to isolate motion and provide undisturbed sleep when your partner moves in bed. The mattress has a medium tight top feel and is available on Beautyrest.com for $2,699 (queen).

“We’ve found that roughly a quarter of couples purchase a new mattress when getting married, and with the Beautyrest by Christian Siriano bed, we wanted to provide couples a great foundation for a healthy sleep relationship,” said Taylor Beckstead, Senior Director of Marketing for Beautyrest. “This limited-edition bed combines Christian’s exclusive design with our innovative sleep technology to promise couples first-class sleep.”

The Beautyrest by Christian Siriano mattress is now available at Beautyrest.com.

The ultimate in first-class sleep luxury, Beautyrest has been a leader in sleep innovation for more than 90 years. From its sustainable Harmony® line to the indulgent Beautyrest Black® collection, every Beautyrest® bed is engineered for an invigorating night’s sleep to help you make the most out of each day. In addition to its consumer collections, Beautyrest is also a leading provider of beds for the hospitality industry. Beautyrest is proudly part of the Serta Simmons Bedding family of brands. For more information, visit Beautyrest.com.

CFDA designer Christian Siriano launched his eponymous collection in 2008 following his studies in London under Vivienne Westwood and Alexander McQueen. Known for whimsical and show-stopping design, the collection is shown each season at New York Fashion Week and to global retailers. In 2012, the first flagship Christian Siriano store opened in NYC and his latest retail venture, “The Curated NYC”, was located in the heart of midtown. Siriano’s designs have been worn by current FLOTUS Dr. Jill Biden, former FLOTUS Michelle Obama, Angelina Jolie, Ariana Grande, Julianne Moore, Lady Gaga, Tiffany Haddish, Billy Porter, Cardi B, Amy Adams, Kelly Clarkson, Scarlett Johansson and Helen Hunt to name but a few. Siriano was named among Time’s 100 Most Influential People for his leading contributions on body diversity on the runway and red carpet. Most recently Christian has been heralded for leading the PPE charge during the COVID-19 pandemic. His atelier shifted entirely from clothes to masks and to date he and his team have shipped one million masks to frontline workers in the New York area. 2020 also saw Siriano launch his own digital BRAVO talk show called “SO SIRIANO” which saw him break down all things fashion and pop culture with guests ranging from Drew Barrymore, Leslie Jones, Billy Porter, Ashley Graham, Sarah Michelle Gellar and Sia. And Christian fulfilled a longtime passion when he added interior designer to his impressive list of credits with the debut of his newest venture, Siriano Interiors. With over a decade of fashion experience, the Siriano design studio will create uniquely bold spaces that are modern, playful, warm and luxurious.

Select a year
Select a brand